(updated by Jackal Of Death)

If you have any questions or think of something to add feel free to message me on here or on Reddit or join us on Discord.

The Skills page lists every skill in the game with a detailed explanation.

Knowing who attacks first is crucial when planning Skill order. Your Heroes will always attack first unless fighting one of the Weekly bosses, they attack first. Regular Epic bosses and special map bosses do not attack first. Order Follows this pattern:

When an enemy attacks, if the target for the attack is not specified the damage is split between the front row. If a monster's attack is to deal 1.8x Atk, with 2 heroes in front both will take 0.9x Atk, 3 heroes will take 0.6x Atk each.

3 examples of specified damage are:

When an enemy uses an Area of Effect attack it follows this pattern:

When an enemy uses a Damage Over Time attack it will add an effect to each Hero. This effect will activate when the Hero attacks and they will suffer damage afterward. This effect can be cleared with Cleanse.

The 3 Hero True Damage Skills, Cheap Shot, Puncture, and Twilight Strike deal only what the description says. For example, if a Rogue has 500 Atk and 500 Acc, using Cheap Shot 2 (1.4x Atk+Acc) will deal 1400 damage. The Enemy will take 1400 damage and not calculate for Defense values.

Luck increases the chance for increased quantities of items to drop from quests. Luck value is equal to a direct percentage increase.

For slots 1 and 2, Luck increases the number of materials dropped. Every 10 Luck gives +1 guaranteed item drop, up to 5 materials cap. (Slots 1 and 2 only)

For slots 3 and 4, Luck increases the chance to receive a drop from this Slot for each item by % (multiplicatively, by amount equal to party's combined luck) For slots 3 and 4 the cap depends on the Quest. See each Quest page for the cap.

All Heroes have 0 luck except for the Bard who has a passive Luck bonus of 10.

All weapons have an invisible Crit stat of 1 except daggers/knives which have 5.

Quest timers have been given a flat time to finish and these can be reduced down to 50% of its total time. There are 3 factors that reduce quest time.

So 50% Speed gives you x a 0.5 modifier. The more turns it takes to finish a quest means a lower grade and higher Quest timer.

All Weapons and Armor in the game have a chance for rolling a Prefix when crafting or buying. Adding a Prefix to a weapon also increases the Rarity of the item. Once you have unlocked the Enchanter you can use them to try and add or reroll Prefix.

All Prefixes are weighted, with most being 5 10 or 20. Fortunate prefix has a weight of 10 and with the total weight of all Prefixes being 710, there is a ~1% (10/710) chance to roll it. Eventually, weaker prefixes become unavaliable as your crafter/enchanter levels up.

In order to get a certain Prefix during the craft

EnchanterLvlReq is found in the table above.

Chance to roll a prefix on craft

An A Grade Demon Axe with level 50 Blacksmith trying to gain a Radiant Prefix:

In this example, The item has a 16% chance to roll any Prefix. The item, however, does not meet the requirement to roll a Radiant Prefix as noted by False above. (54 was not greater than or equal to 61)

All Weapons and Armor in the game have a chance for rolling a Suffix when crafting or buying. A higher Suffix increases an items stats and selling value. Suffixes range from none to +12. Adding a Suffix to a weapon also increases the Rarity of the item. Once you have unlocked the Enchanter you can use them to try and increase Suffix by 1. Doing so also has a chance to critically fail and decrease the Suffix by 1 from the item being enchanted.

All Suffixes are weighted. If a Suffix has a weight of 10 and with the total weight of all Suffixes being 144, there will be a ~6% (10/144) chance to get the specific Suffix on craft. Eventually, weaker suffixes become unavaliable to roll as your crafters level up. Currently, maximum suffix to roll by crafting is +11.

Chance to roll a Suffix on Craft

Suffix.MinLvl (From the table above)

An A Grade Demon Axe with level 50 Blacksmith:

There are 4 types of Heroes: Tanks, Damage Dealers, Healers, and Support.

There are two types of tanks, traditional and non-traditional.

Traditional tanks are designed to absorb damage. They gain increased bonuses from Def and Mdef and have increased health. They include Warriors and Paladins.

Non Traditional Tanks are designed to negate damage rather than take it. They include Rogues and Assassins. This is accomplished through the skill Evade. In late game Clerics, Paladins and Dark Knights can also act as tanks with the ability to self-heal.

There are 3 types of Damages, Physical, Magical, and True Damage. Physical Damage benefits from Str bonuses and results in high Atk damage. The primary physical fighter is the Berserker.

Magical damage benefits from INT bonuses and results in high Matk damage. The primary magical fighter is the Mage.

True damage deals damage that is not dependant on Def and Mdef values. The three True damage fighters are the Assassin, Rogue and Dark Knight.

The Dark Knight is also a hybrid physical-magical damage dealer. They gain an equal bonus to Str and Int, however, magical damage building is more beneficial later on.

There are 3 Heroes who can heal, Cleric, Paladin and Dark Knight. The Paladin can deal damage and heal themselves in the process. He also has ability to heal the whole party that uses MAtk and MDef as coefficients. The Cleric has 2 healing skills, one for the whole team and one for the Hero in front of them. They also have a Skill that can Revive a fallen Hero. Dark Knight can heal themselves through the lifesteal from skills Unholy Slash and Unholy Slash II, depending how many damage they deal. It is not possible to heal more than the amount of Hp a Hero had at the start of the battle.

There is only 1 support Hero currently available the Bard. The Bard can buff the Atk of the team, Atk&Matk&acc of a singular hero, along with increasing Crit damage and other various boosts.

You can reclass any Hero to another as long as you have met the requirements for that Hero, by clicking the button on the top left of the Hero overlay screen. This costs 2,000 gold X # of Heroes.

Once a Hero reaches level 40 they have the option of Prestiging. This costs 10,000 Gold and will reset their level to 1 but they will gain increased stats per level and also unlock more Enchant Potion slots. After purchasing the Frozen Tome expansion a Hero can Prestige a second time at level 50 for 50,000 Gold and can be raised to level 60 They gain even more stats per level and more Enchant Potion slots.

There are 2 Crafters that can be unlocked.

This section is transcluded from Jeweler. To change it, please edit the transcluded page.

Unlocked after any of your default Crafters (Blacksmith, Armorsmith, Woodworker, Clothworker, or Alchemist) is leveled to 15, they cost 15,000 coins to unlock. This crafter turns Crystals into Gems and creates jewelry such as earrings, necklaces, medallions, and trinkets.

This section is transcluded from Enchanter. To change it, please edit the transcluded page.

The Enchanter is a Crafter who is unlocked after purchasing the Jeweler and leveling any crafter to 25, they cost 60,000 coins to unlock. They turn Gems into Runes and use Crystals, Gems, and Runes to modify the stats of weapons, armor, and trinkets.

Don't unlock till the very end, after getting 10 Heroes to level 50 P1 and stock up on all Crystals and Runes. This is a massive money sink - ~750k coins needed to raise to level 50 (might be a little less with XP events).

Improve Stats Re-rolls current item stats of weapons, armor, and trinkets using Crystals. This can also be used to improve item's Grade. The item can first go to a lower Grade before advancing higher. The first re-roll will cost 1 Tier appropriate Crystal and coins.

Xp The amount of Xp awarded for re-rolling stats is:

Gold cost The amount of Gold it costs to re-roll stats is:

Prefix Enchant Re-roll or attempt to add a Prefix to weapons, armor, and trinkets using Gems. A success will also re-roll the items stats. The first attempt will cost 1 Tier appropriate Gem and have a varied success rate. After every attempt regardless of the result, the % chance of critical failure increases by 4%. If this option is rolled the item will have its Prefix removed.

Xp The amount of Xp awarded for rolling for Prefix is:

In order to Enchant a certain Prefix The following equation must equal the Prefixes required level from the table above.

Gold cost The amount of Gold for rolling for Prefix is:

Suffix Enchant Attempt to add or increase an Item's Suffix for weapons, armor using Runes. A success will also re-roll the items stats. The first attempt will cost 1 Tier appropriate Rune and have an 95% success rate. After every attempt regardless of the result, the % chance of critical failure increases by 4%. The more an item is enchanted for Suffix, the chance to lose (and upgrade) Suffix increases. If this option is rolled the item will have its Suffix decreased by 1.

Xp The amount of Xp awarded for rolling for Suffix is:

Gold cost The amount of Gold for rolling for Prefix is:

There are 2 hidden Heroes that can be unlocked and 1 that is unlocked through DLC.

You start with 4 Slots and can purchase 8 more for a total of 12 Slots. It costs 12750 coins to purchase every Selling Slot.

After unlocking the 2nd Hero, Customers appear. The number of customers available is equal to the number of heroes unlocked + 2 (Max of 12 Customers).

The first DLC expansion costs $2.99 USD and includes the following:

The second DLC expansion costs ??? USD and includes the following:

More to be announced.

The Home Screen has eight interactable buttons and 1 interactable area. Only 7 buttons are available by default. The Store (2) is unlocked after purchasing the second Hero. If you have previously purchased anything from the Store and have switched devices, there is now a Restore Purchases" option under Settings. (3) 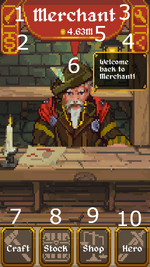 There are 3 options found under this menu. 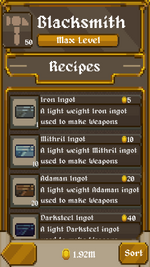 Recipes you have unlocked 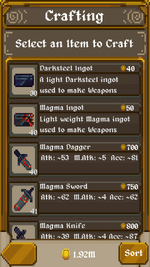 All Items your Heroes collect and Crafters craft are displayed here. You start with 16 Slots and can purchase 80 more for a total of 96 Slots. It costs 537,400 coins to purchase every Inventory Slot. With In App Purchases you can purchase an additional 64 Slots for $0.99 USD for 16 at a time. This brings the total number of Inventory Slots to 160. You are given two of each Tier 1 base Material to start the game.

Items are sorted, by default, by ID and displayed Potions first followed by Equipment and finally Materials. You can now sort the Inventory by Type, Value, Level, or Rarity. There is no reachable limit to how high a stack of items can go. Pressing and holding a stack will display the number of Materials of each Grade.

You start with 4 Slots and can purchase 8 more for a total of 12 Slots. It costs 12,750 coins to purchase every Selling Slot. When an Item has sold the icon will change to an envelope with an exclamation point. To cancel a sale press and hold on the item. At the bottom are four Slots for visiting Customers. There can be more than four at a time but only four will be displayed at a time. 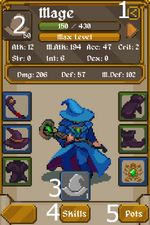 Don't know where to put these in yet.

Retrieved from "https://merchantrpg.fandom.com/wiki/Guides/Game?oldid=14057"
Community content is available under CC-BY-SA unless otherwise noted.